My old Sociology teacher Mrs Turner, once called me culturally deprived. At the time I wasn’t quite sure what she meant (I suppose that could have been down to my cultural deprivation). When I became an adult I understood what she meant. I had experienced very few traditional male influences during my childhood. I had no interest in mechanics, DIY or any other manly pursuits. When I was very young my Father was away at sea for much of the time, and when he was around never included me in such activities. When I was older and potentially more able to assist with changing the oil in the car, replacing light fittings or just using power tools in a macho way, my parents were divorced. I never went to watch football as Dad hated watching it, therefore when I was old enough to go by myself I never really had the interest or the emotional investment in a team.

My childhood had been dominated by female influences. Personally I never saw that as a deprivation other than when it comes to fixing anything or appearing at all macho I feel totally inadequate. If you want someone to change your tyre, I am not your man, but if you a feeling fed up and fancy a chat about it, then look no further.

As my boys got older I saw my chance to integrate them into male society, I couldn’t teach them how to change a tire or even drive, but I could introduce to the tribal experience of supporting your local football team (the route to male cultural integration).

So it started with taking them to the odd game and sitting in the West Stand Upper tier so we all could see the action better (I was a novice at going to football matches myself). Then we all got passes and went to every home game together. Me with my 2 boys, their eyes wide with excitement screaming and shouting at the players and the referee. I remember we played Burnley on my eldest birthday and we lost (I forget the score), he was furious, he spent 2 minutes at the end of the game shouting at the players as they left the pitch about how they had ruined his birthday, and it wasn’t about the fact they had lost, but more about the way they lost, it was fabulous to see.  Then there was another Burnley game, away this time, in fact our first away game, we were with a friend and I had popped to the toilet on my way back I could hear the crowd cheering as the team came out and my youngest was crying as he hadn’t expected such a loud response. As the game went on he relaxed and got into the flow by the time Geovanni was sent off he was stood on his chair screaming at the ref along with all the other fans, I wont repeat what he was chanting ( I am certain he didn’t know what it meant and was just copying).

I hadn’t taken them to the first play-off final, so the FA Cup semi-final was their first trip to Wembley. It still brings a tear to my eye thinking about it. They were watching their team from their home town play at Wembley, I cannot imagine what that must have felt like, and then to get to the final well that was incredible. Those are 2 days I will never forget, more for the fact that I shared it with my boys.

As my eldest as got older his interest in going to the football has dropped off and he doesn’t go anymore, however he still catches up on the results and likes to watch the highlights, but girls and music have temporarily taken over. However his home team is still the team he supports. So for the past 2 seasons it has just been me and Jack, and I love going to the football with him, it is 2 hours of chat about city, predicting the score and then dissecting the result.

The most important thing about supporting city with my boys, is the common memories that we share, in years to come we can think back to the FA Cup final the trip to Burnley when I was so hungover and probably still drunk that spilled my tea all over my pie and mash in the café before the match, and then Jack using some rather industrial language to describe what the referee does in his personal time.

Thank you Hull City for remedying my cultural deprivation and ensuring my children are never deprived. 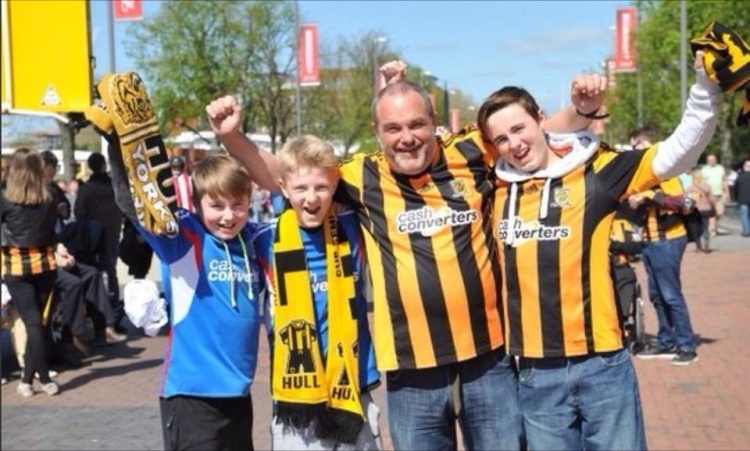