At the beginning of the week I had 2 wonderful telephone meetings with the coach that will be delivering the taught aspect of the coaching qualification we are hosting in March. I will be working alongside him getting a feel for delivering the course sometime in the future. As always a conversation with Anthony always leaves me motivated and positive. A large part of the second meeting was a mini coaching conversation concentrating on my feelings about my role in the teaching sessions and my role as lead coach. We examined where I see myself and what presence I want to have in both sessions, and what mindset I need to have to create a comfort in that presence. As with all successful coaching conversations they go beyond the meeting and continue internally throughout the rest of the day and evening. The next day I was due to co-deliver a one day manager as a coach training session. The questions and challenges posed by Anthony sat with me in the evening before asking me to exam my approach to delivering the content alongside the author.

I met up with Lucy the author of the training day before the session. Lucy is my manager for the 2 Coaching lead days I work. She is however more than my boss. She is a fellow coach and is responsible for me becoming a coach and doing the role I do. So she is my sponsor, mentor and coach. Because we have this relationship I feel comfortable discussing my feelings and insecurities about teaching alongside her. When you co-deliver a training session that provokes discussion it is important to learn how work in harmony. I like to think of it as a dance. When you first dance with someone new you sometimes step on each other’s toes. The key to becoming seamless is to accept that this will happen and check in with each other during the day. I love working with Lucy in these days, we have a lot of fun and I learn so much from her.

The training day itself was a success. The candidates played their part and contributed to the day, creating an energy in the room. The best training sessions is where the session is not dominated by one voice, but everyone contributes and we all learn something, that certainly was happening on Thursday. The most successful aspect was that there are now 7 more leaders that have realised the power of high quality questions and hopefully have the confidence in trying them out.

On Friday I was on my own giving a brief half day introduction into coaching. This was the first time I had delivered it. I spent Thursday evening and Friday morning wondering how I was going to get all the information needed to introduce coaching into a three and a half hour teaching session. In the end it was simple really, have a coaching conversation and discuss it. That is essentially what I did and then we ended with everyone practicing a coaching conversation. I was coached by one of the participants and found that 10 minute conversation so powerful that I felt quite emotional. That is how powerful a simple short coaching conversation can be. Some one who at the beginning of the morning who did not think they could coach someone and when faced with coaching me looked terrified, was able to raise my awareness on my career progression to such an extent that I felt quite emotional. All she did was ask 4 high quality questions. Granted she had a list of questions that she could use to help her, however she chose the 4 questions that she thought would help me raise my own awareness. It was quite incredible.

As you can see I have had another inspiring week at work. Personally it has been a little more frustrating. The pain in my heel is still preventing me from running and I cannot motivate myself to find an alternative exercise regime. I have found myself concentrating on work so have not put any thought into any other action plans. We will see over the next week or so how that pans out. I feel that fitness will rise up my priority list soon, as I am on holiday in a couple of weeks.

Last night we went to see Reverend and The Makers at Northpoint Shopping Centre! Yes you read it correctly as part of the UK City of Culture, bands and other acts are invited to perform in venues throughout the city that would not normally be used for arts.

If I am honest I did not fancy going. They are not really my thing, I was tired and my foot was hurting after being on my feet most of the day. I went thinking they would be entertaining, it would distract me, I might end up liking them more and Lisa really wanted to go. I went along not really feeling it, but trying my best to be positive and open minded. The wait for the band coming on seemed to me to be forever. It was an hour and half. For some reason there was no support act. I am sure there are plenty of local bands that would have been happy to play for free, to get the exposure. We were not so lucky, instead we were subjected to a very strange Indie disco in a shopping centre with no heating, with around a thousand drunk and getting more drunk by the minute middle aged couples (we were sober, that is myself, Lisa and our friend Paula). The band came on at 9pm, by this point I was cold, tired and pissed off. They were going to have to be amazing to win me over now. Unfortunately they fell short of amazing for me. They started ok, then they had some technical issues with a guitar. They started to lose the crowd and for a short while you could sense that this could go south quite quickly, especially after they tried to soldier on and destroyed their most famous song. They did however manage to turn it round and won quite a few people over and the bouncing recommenced. I wasn’t one of them I am afraid, they were alright but I was cold and tired and wanted to be at home. God that sounds so middle aged. If they had, had a decent warm up act I may have felt different, but I fear they needed to have been a different band.

Oh well you cannot have everything and on balance this week has been very positive,

Here is a picture of last night, as I said those in front appeared to be enjoying it. 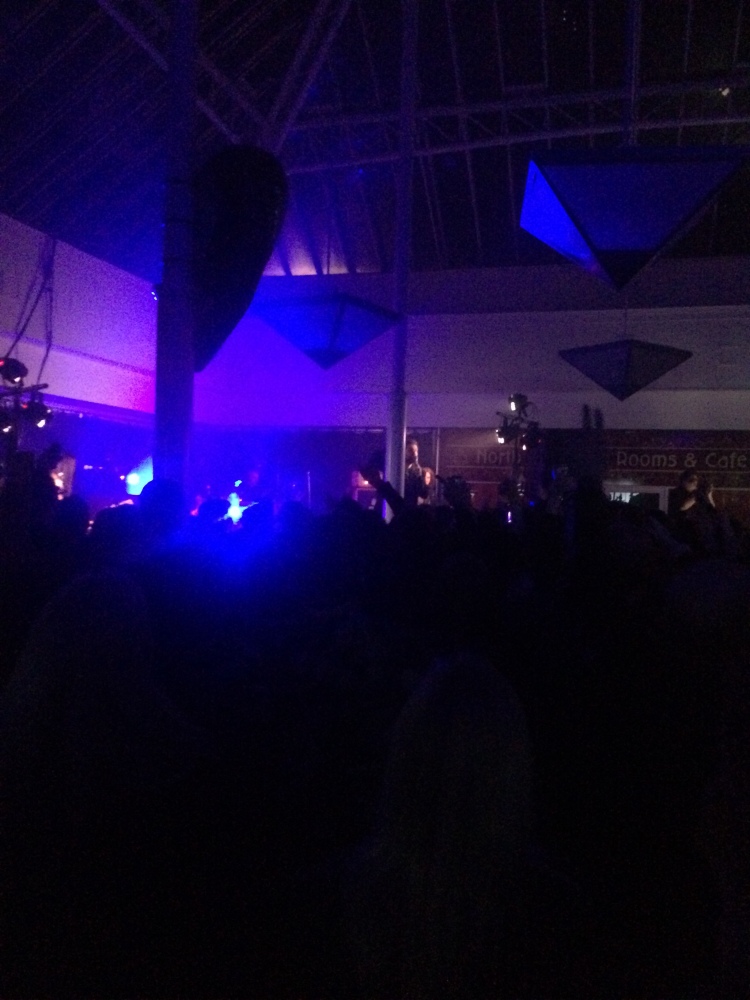